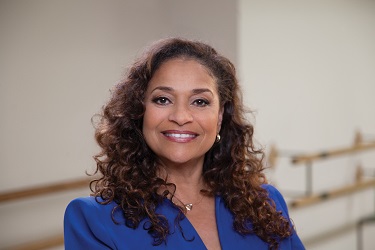 In a career that spans three decades, the name Debbie Allen is synonymous with dynamic energy, creative talent and innovation.

For her vast body of work, Ms. Allen has earned three Emmy Awards, a Golden Globe, five NAACP Image Awards, a Drama Desk, an Astaire Award (for Best Dancer), and the Olivier Award. She holds four honorary Doctorate degrees and has a star on the Hollywood Walk of Fame.

She was appointed by President George W. Bush to represent the United States as a Cultural Ambassador of Dance. She has been artist in residence at the Kennedy Center for over 15 years, creating original works with the legendary Arturo Sandoval and James Ingram, such as: Pepito’s Story, Brothers of the Knight, Dreams, Alex in Wonderland, Soul Possessed, Pearl, Dancing in the Wings and Oman O Man.

Her long list of directing and producing credits include television classics such as FAME, Grey’s Anatomy (where she also recurs as Dr. Catherine Avery), Scandal, How To Get Away With Murder, Jane the Virgin, Empire, Insecure, A Different World, Everybody Hates Chris, Stompin’ At The Savoy, Polly, That’s So Raven, Cool Women, Quantum Leap, The Fantasia Barrino Story, and on stage, Cat on a Hot Tin Roof (on Broadway and London’s West End.) She is currently the directing Executive Producer on Grey’s Anatomy for Season 14 of the program.

With her keen eye for talent, Ms. Allen discovered entertainers such as Jada Pinkett Smith, Gary Dourdan, and Jasmine Guy. She was responsible for giving Mia Michaels her first job choreographing for television.

A true devotee of Arts Education for young people, she has trained some of the most dynamic young talent on the scene today - Vivian Nixon, William Wingfield, Jada Grace Gordy, Taylour Page, Dion Watson, Danny Tidwell, Corbin Bleu, Hannah Schnieder and The Crewe, a dynamic, multi-cultural group of young singer/dancers.

She has worked tirelessly to enlighten, inspire and engage young people around the world through dance and theater arts. She recently debuted her anti-violence dance musical, Freeze Frame…Stop the Madness during John F. Kennedy Center’s Centennial Celebration.

In 2001, she founded the non-profit Debbie Allen Dance Academy in Los Angeles. The school’s mission is to fill a void for youth who have an interest in learning dance and performance technique.

A native of Houston, Texas, she is the daughter of Vivian Ayers and Dr. Andrew A. Allen. She is the wife of NBA All-Star Norman Nixon and mother of Vivian Nichole and Thump. She is the sister of Tex, Phylicia, and Hugh.

The Honor goes to an individual who has demonstrated extraordinary leadership in the dance field by reason of artistic excellence and/or force of vision.